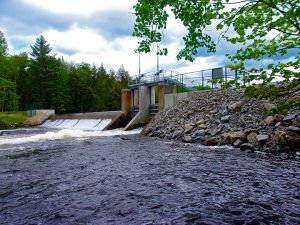 Laberge Group was retained by the Town of Indian Lake to provide engineering services for the Lake Abanakee Dam. NYSDEC Dam Safety records had identified that Abanakee Dam did not provide adequate spillway capacity. In addition to spillway upgrades, capacity improvements had to be included in the Town’s project as well. The Dam was originally constructed with a flashboard system that was designed to fail as 100-year storms approach, to provide additional spillway capacity. Unfortunatley, over time the flashboards had been converted to stoplogs by adding steel bracing and supports to prevent failure – and in turn compromised spillway capacity.

Laberge Group performed a flashboard evaluation as required for the permit application. Flashboards are considered by the NYSDEC on a case by case system, and as such our engineering assessment intended to show how to the flashboards were the only solution to the problem. Practical difficulties associated with other design options were listed and proved not only costly, but environmentally unsound.